So you’ve fronted one of the most lauded over hardcore rock bands of the mid 2000’s, you’ve successfully kick started a solo career with a schizophrenic double album of crazy metal and random acoustic wizardry, and you’ve just left Xtra Mile Recordings in search of pastures new… Guess that calls for a tour then right? 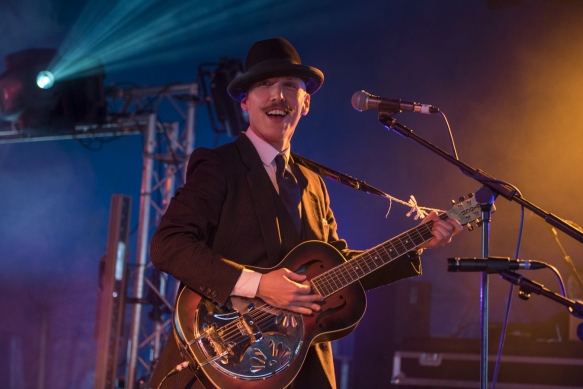 Jamie Lenman; you know him, you love him. The ex-Reuben front man turned loudest soloist in the country stormed into Bristol on the midway point of his latest UK tour on 29 April, boarding the Thekla with his chums Super Goliath and God Damn for an evening that damn near sunk the famous ship/venue.

That’s not an understatement, it was chaos!

I’ll hold my hands up now and say I wandered in too late to catch Super Goliath (Sorry to their manager Barry Dolan and the band themselves!) but having caught them before I can safely assume it was another immense performance. I know that’s not helpful, but that’s the best I can offer… feel free to give me a “try harder next time” when it comes to opening act reviews!

God Damn however, that’s another story. Having recently added touring member James Brown into the lineup to return to their three-piece origins, the Black Country rockers overcame a litany of late set technical issues in seasoned style, managing to distract everyone from their (unintentional) wailing synthesiser feedback and passed it off as part of the set by maintaining their cool and carrying on regardless. Jolly good show chaps.

Other than that, they were everything you’d expect of a band with their credentials. The nice touch came from frontman Thom Edward who passionately told the crowd of his love for Reuben and how when he was younger all he wanted to do was play in a band like them. You got your wish Thom, you guys were more than equal to the legends themselves.

With the final crashing chords of God Damn’s set came the hush of anticipation and the jockeying for the best position in the room to see the man of the hour. If you’ve ever been to a sold out show onboard Thekla, you’ll have witnessed first hand what I mean when I say elbows were out, in a firm but fair way. I found myself in the back left corner, up against one of the old bulkheads and staring straight down the barrel of one of the PA stacks. You’re probably wonder why I’m telling you this… It will become clear later… Read on.

Lenman hit the stage with his latest single Waterloo Teeth to a screaming reception. For a song that’s only been out a few weeks, the assembled masses sang every note like it was from the first Reuben album, proving the old dog still has it clearly. Performing as a two piece rather than dragging a full cast of musicians round the country with him this time, Lenman has rigged up a bass amp and guitar set up to produce a bone shaking sound. I mean literally.

Remember I said I was standing in that bulkhead corner? Every single resonant frequency from that speaker stack not only hit me square in the face but reverberated off that steel wall and right back into my bones… And the results clearly were the same across the room. It was a filthy, full bore sound that words cannot describe. I mean it literally was gob smacking…

The set itself; full of Lenman’s classic humour, charm and classic songs. Every word, every note was propelled back from the crowd, save one brand new song which received probably the most appreciative round of applause of the night and drew a beaming smile of renewed confidence from the clearly trepidatious Lenman.

It’s an interesting time for Jamie Lenman. He’s clearly got something brewing, having recently signed to BSM after very publically stating he wouldn’t make another record unless it was with a label that had some reach. This tour feels partly like a release valve and a confirmation to himself that the crowd he has garnered and connected with for so many years now will still always welcome him back with open arms. Personally, if he keeps producing performances like the one in Bristol, he’s going to cross that last boundary that Reuben never managed to scale and find himself top of the pile once again, but this time in the mainstream.